On this page, the Aztec Calendar and culture, often confused for that of the Mayan, is explained. Discover the differences between the two ancient civilizations here.

What is the Difference between the Aztec and Mayan People?

Although the Aztec and Mayan civilizations were entirely different, they are still mistakenly considered as belonging to the same culture as both shared centers marked by large, stepped pyramids. For more information on the very similar Mayan Calendar, it can be found in our selection of World Calendars.

Geographically, the Mayan culture was more extensive as it originated from the Southern jungles of Mexico but expanded as far as Central America, predominantly located in the jungles of Yucatan, Guatemala, Honduras and Belize. In contrast, the Aztecs, also known as mexica, were the dominant culture located in the valleys of Central Mexico with their centre based in Tenochtitlán (today's Mexico City)before Cortes arrived in the 1500s.

Thousands of kilometers separated both Mayans and Aztecs as well as a significant time difference. The Mayan culture preceded the Aztecs by a large margin and, although the Mayan culture was still in existence when the Aztecs established their civilization, had reached its highest and most successful peak by 300 AD which was around 1000 years before the Aztecs even arrived in Central Mexico.

What is the Difference between the Aztec and Mayan Calendars?

The Mayans, like the Aztec populus that followed them, combined three separate means of keeping time to form their calendar: the Tzolkin, the Haab and the Long Count. Both the Aztec and Mayan Calendars were based on a timekeeping system that was quite common in typical Mesoamerican calendars.

However, a fundamental difference between Mayan and Aztec calendars is that the latter didn´t use the Long Count to apply dates to a time frame longer than their 52 year cycle. Whereas, the longest count in the Mayan calendar is 63 million years. Although the Aztecs essentially used the same system as the Mayan Calendar, they applied different names, for example, the Aztecs called their 260 day calendar (the equivalent of the Tzolkin) Tonalpohualli and their 360 day calendar (the Mayan Haab) Xiuhpohualli. The glyphs used to designate the days were also different.

There is often confusion between the ancient Aztec calendar and the Mayan Calendar as they both appear very similar. The pictures below illustrate the subtle differences between the two calendars: 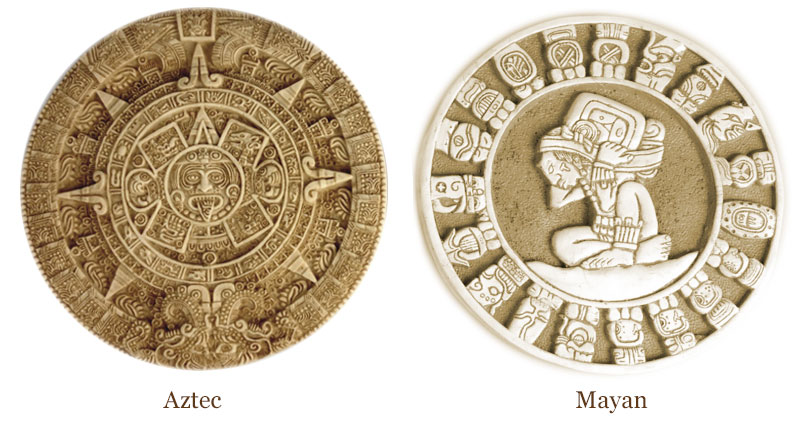