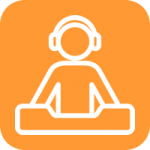 Find out the remaining days, hours and minutes until the Glastonbury Festival with the help of the Glastonbury Countdown Clock. One of the most unique and widely anticipated Music Festivals around, Glastonbury offers a vast array of entertainment over five days during the summer in Somerset. The Countdown to Glastonbury is ready to help you prepare for one of the biggest Music Events in the UK.

For even more Holiday and Cultural Event Countdowns showing the remaining time until the most Important Dates, you can consult our Countdowns Page.

Originally called the Pilton Pop, Blues & Folk Festival, the Glastonbury Festival we all know and love today is a five-day music event which takes places near Pilton in Somerset, England. As well as contemporary music, Glastonbury hosts dance, comedy and theatre events too. Organised by Michael Eavison on his own plot of land called Worthy Farm, the Glastonbury Festival receives widespread television and newspaper coverage as the largest Greenfield Festival in the World and is currently attended by around 175,000 people every year.

Glastonbury was held intermittently from 1970 until 1981 but, since that time, the Festival has been held annually disocunting the "fallow years" which take place every 5 years and are intended to give the land and local villagers a brief respite.