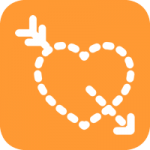 More Holiday Countdowns showing the days left until the most important annual celebrations and festivities can be found on the Countdowns Page.

Valentine's Day, also known as Saint Valentine's Day, is an annual holiday celebrated on 14th February by countries all over the world. Originally a Saints Day for St. Valentine, there are many accounts as to the inception of the popular Romantic Holiday. The most popular of which states that Saint Valentine of Rome was imprisoned for performing weddings for soldiers who were forbidden to marry as well as ministering to those of the Christian faith who, at the time, were persecuted by the Roman Empire. Legend states that St Valentine signed a letter to the daughter of his jailer (whom he healed during his encarceration) with the farewell "Your Valentine" before his execution.

Since then, Valentine's Day has gradually developed into the holiday we celebrate today in which lovers express their love for each other by offering flowers, sweets and romantic greeting cards.