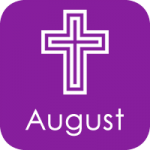 The Saints which are celebrated during the month of August are shown in the August Saints Day Calendar. Referred to as the Saint´s Feast Day, most days of the month celebrate at least the life and Sainthood of one Saint. Sometimes, more than one Saint can be celebrated on one particular day in this type of Religious Calendar.

August 20th: Saint Bernard of Clairvaux, Abbot and Doctor of the Church

August 28th: Saint Augustine of Hippo, Bishop and Doctor of the Church and Saint Hermes, Martyr

August 29th: The Beheading of Saint John the Baptist, Martyr