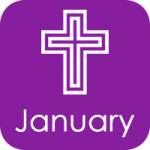 In the Feast Day Calendar for the month of January, the names of the Saints celebrated by the Roman Catholic community are displayed. As part of our selection of Religious Calendars, the Calendar of Saints for January can be used to find out which Saints are celebrated throughout the course of the month.

January 18th: St. Prisca, Feast of the Chair of St. Peter of Rome

January 25th: The Conversion of Saint Paul the Apostle