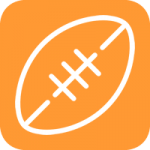 For more information on Rugby Fixtures and upcoming matches, we have a Rugby Calendar in our Sports Calendars section. Whereas, more Countdowns and Timers can be found on our Countdowns Page.

The first Rugby World Cup Tournament was held in 1987 and co-hosted by New Zealand and Australia. The winners of the Rugby World Cup are awarded the William Webb Ellis Cup which is named after the inventor of the game when he was a pupil at the Rugby School and inadvertently picked up the ball during a football match.

Organized by the sport's governing body called the IRB (International Rugby Board), the Rugby World Cup was originally made up of 16 teams but, since 1999, 20 teams now take part in the tournament. The following Rugby World Cup Tournaments will be hosted in 2015 by England and in 2019 by Japan.