Counting down the days until the Wimbledon Tournament, the Wimbledon Countdown Clock can help you to keep track of the run-up to the Summer Grand Slam. 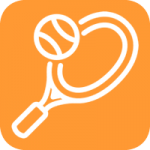 If you'd like to see more information on the matches and fixtures for all upcoming tennis matches and Grand Slam Tournaments, you can take a look at our Tennnis Calendars found within the Sports Calendars Section. For more Timers and Countdowns to Sports Events, take a glance at the Countdowns Page.

The Wimbledon Championship Tournament is the oldest tennis tournament in the world and one of four annual Grand Slam Tournaments, also known as Majors, made up of: the Australian Open, the French Open and the U.S. Open.

The Wimbledon Tournament is notable for several traditions including the strict dress code for all competitors, the eating of strawberries and cream as well as Royal Patronage.